Cease-and-desist orders are an important element in the history and culture of intellectual property of the tabletop role-playing game industry. I will show how these legal actions had a negative impact on citation practices and how they hampered the explicit dedications, tributes, attributions and acknowledgments in the published works.


The purpose of a cease & desist letters is to precisely, explicitly and formally warn a person or an organization about a conflict. It can be written by anyone (a law firm can bring a little more credit and potentially more legal precisions). It also often contains a way to resolve this conflict, usually ceasing an activity (cease) and making a commitment not to undertake it again (desist).


Dungeons & Dragons was the first role-playing game released, and TSR's C&D were the firsts legal actions to impact the role-playing community (the company earned the nickname «T$R» or «They Sue Regularly»). Furthermore, TSR and WotC being the main players in the role-playing industry, their practices have had a significant influence. Later, the introduction of the Open Game License by WotC was a pivotal moment for intellectual property and it was a kind of reversal of C&D values.

TSR received a C&D in 1974 from the E.R. Burrough Estate Foundation for Warriors of Mars (15).

In the first edition of Tunnels & Trolls (1975), published by Flying Buffalo, its author Ken St-André mentioned ans scknowledged Dungeons & Dragons in his discovery of role-play gaming.


TSR sends out a C&D circa 1975 or 1976 against the Flying Buffalo Company and Metagaming Concepts magazine for their advertisements and reviews of Tunnels & Trolls, defined as a game "like D&D".


Without surprise, the reference to D&D disappears in subsequent editions of Tunnels & Trolls.

TSR receives a C&D at the end of 1977, from Saul Zaentz (via its Elan Merchandising division which had acquired the non-literary derivative rights from Tolkien) for the named creatures like Hobbit, Ent, Balrog, etc. (5, p. 29).

Jeff Pimper and Steve Perrin approached TSR to publish a collection of monsters and they received a C&D letter from TSR in return (5, p. 250). Finally, they published their famous All the Worlds’ Monsters with Chaosium in 1977, a few months before TSR's Monster Manual. Since this success, Chaosium has grown into a major TTRPG publisher.

In 1978 and 1979, the authors of RuneQuest (Chaosium) dedicated the first two editions of their game to Dave Arneson, Gary Gygax and Ken St-André (discussed in a previous post).


The second edition of RuneQuest included a full page of bibliographic references, among them : AD&D, D&D, but also Tunnels & Trolls and Arduin Grimoire. 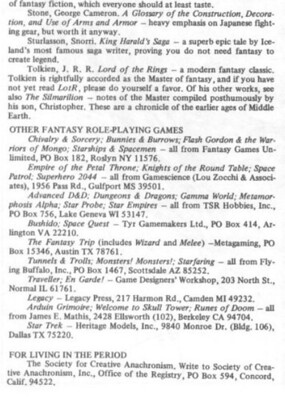 TSR received a C&D in 1981 from Chaosium for the inspired section of H.P. Lovecraft and Michael Moorcock in Deities & Demigods (9; 12).

The dedications and the bibliography disappeared in RuneQuest 3rd edition (from Games Workshop in 1984). The mention of D&D reappeared in the 6th ed. of the game (p. 4, 2012). A literary bibliography reappeared in HeroQuest - Roleplaying in Glorantha (p. 266, 2003).

TSR sent a C&D in 1992 against Gary Gygax and his game Dangerous Dimensions (DD) before its publication, renaming it Dangerous Journey. (5, p.101)

TSR sent C&D in 1993 against a large number of FTP sites or websites that contained material for D&D, even sites without copyright material (2).


"As the Internet exploded onto the public consciousness in the early-to mid-90's, D&D players naturally brought their chosen hobby online. TSR followed them, issuing dozens of cease and desist orders that shut down fan sites. The company even tried to prevent D&D fans from discussing the game in chat rooms and on message boards, earning derisive nicknames such as: “They Sue Regularly” (TSR) or “T $ R”, to stress the appetence for money of TSR managers ." (11). This caused significant animosity in tabletop role-playing communities (1, p.155).


Between 1991 and 1994, Shannon Appelcline, now WotC product historian, remembers being very angry when he received an email from TSR for a C&D website that he administered but which did not contain any content related to D&D (16, 9 min. 30 s.):


"Most of the people would have had the same reaction, hey we don’t like this already [T$R] and now they send these nasty letters for legal rights they probably don’t have, and they are doing it incorrectly too. (...) After receiving that letter, I didn’t touch anything related to TSR until 98-99 or so. (…) It pretty damages my relation with the company as a fan, yes. "


This wave of C&D seems to have been quite massive and has been dubbed “TSR vs. The Internet ”(17).

(Edit 2020-09-06: It seems that in the 90s «  it was a scary time for IP rights, there was a real concern about losing rights because of the assine way US law forces active defense to retain things. Case law didn't exist yet to protect rights-holders from fan-work. » (Armorlord).
(UPDATE: read more Games & The Law, Part Seven: The D&D Dilemma)

2000. WotC introduced a new practice in the tabletop role-playing games publishing industry: the Open Game License (v.1.0). It matches a spirit of the time : the free software licensing and copyleft movement. It also provides a counterpoint to the values ​​and damage done by TSR's C&D waves.

WotC sends a C&D in 2010 against Masterplan where a fan comments: “It’s almost a badge of fandom. Only the Real Fans of the game get C&D letters - the ones who genuinely care about and love the game so much that they’re willing to invest substantial time and effort into building tools, forums and sites which support it. (…) A friendly email request would doubtless resolve any issues born out of simple ignorance or over-enthusiasm. Using C&D as a first solution is like burning a Daily Power on a Minion - total overkill (…) ”.

By doing some research on the Internet, I spotted these few other cases. Like the facts listed before, there is a search bias and selection bias, so these facts are not representative.

Palladium Books is famous in the role-playing hobby for its numerous C&D letters sent to companies or individuals, especially to those who are converting its rules to other game rules (7; 14).

Games Workshop also restricts the distribution of fan material or homemade miniatures made by fans.

In 2001, Other Hands Magazine, made by a MERP fan, received a C&D from Tolkien Enterprises.

In 2007, the Fallout-based RPG Exodus received a C&D from Bethesda.

2015. The amateur role-playing game Mass Effect RPG for Fate was removed from the Ennies Awards competition by a C&D from BioWare / EA.

Unknown date. C&D received by a GM for an online game of Harry Potter, from Warner Bros.

In Colin Stricklin's memoir, he argues that role-playing games are incomplete products which require dialogue between the authority of the higher order author of the games and the authority of the lower order author, ie. game masters. Their interaction creates an equitable and more democratic culture of convergence. According to him, Cease & Desist are naturally less frequent there than in other cultural media (10, p. 67). I don't agree. No comparison study has been done with other media. Moreover, by seeing this review, it would appear that this is not the case. Finally, savvy hobby participants are familiar with the practice of C&D and know that it is not uncommon.

Thus, it can reasonably be argued that the issuing of Cease & Desist orders have had a profound impact on the role-playing industry and fan communities. More specifically, they have potentially negatively influenced citation, dedication, tribute, attribution, and explicit recognition practices in published works. Indeed, we often quote and cite to be part of a community. However, the exclusion and rejection outcomes of a C&D letter directly hurt this desire of belonging and being included.

I will elaborate in a future post how the Open Game License lead to systematic citation.
(UPDATE : read more at DMDavid Blog « 1994: TSR Declares War on the Internet’s D&D Fans»)
(UPDATE : 2021-01-06: a .csv file of these data is available here https://github.com/pmartinolli/OtSoCG/blob/master/data/ceasendesist_data.csv)

Email ThisBlogThis!Share to TwitterShare to FacebookShare to Pinterest
Labels: bibliometry, history, on the shoulders of cloud giants