History of the name « Dungeons & Dragons »

With his Blackmoor campaign, Dave Arneson was the inventor of the gameplay of the first tabletop role-playing games (Peterson, 2012 ; Kuntz, 2017 ; Graves et al, 2019). In 1973, Gary Gygax decided to edit the mechanical rules and to streamline the game experience. He also decided the name of that game.


« Dave Arneson was up in St. Paul and not with me when I wrote down two single-word lists of possible titles for the game. I did ask my player group which they liked, also queried my family. My youngest daughter Cindy, was adamant that I must use “Dungeons & Dragons.” As a number of others were in agreement with that choice, and I liked the alliteration, that’s what I went with when I took the mss. I had written to the printer in early December 1973. » (primary source : Gygax, 2002)

« Gygax paired random mythic words like fantasy, adventure, swords, and sorcery until he came to one his 4-year-old daughter Cindy approved of. “Oh, Daddy,”she said, “I like Dungeons & Dragons the best!” » (secondary source : Kushner, 2008) 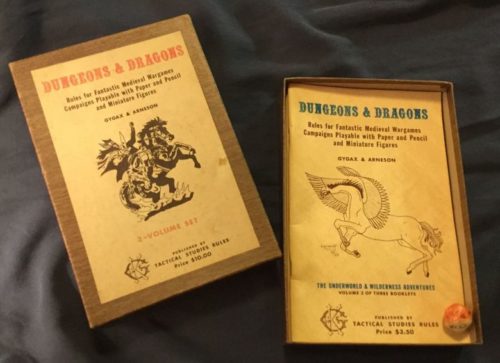 Legacy of the stylistic devices

The name Dungeons & Dragons is copyrighted and it is a registered trademark ®.

The trade dress is another concept of intellectual property designed to protect what make a product unique : special fonts, layout of covers, of texts, of figures, etc. It seems that the stylistic device « ____ & ___ » cannot be claimed as trade dress. For this point, I lack of sources and expertise and I think it can change depending on the cases. For example, after been fired from TSR, Gary Gygax said he couldn't publish a game named Dangerous Dimensions because of the initials "DD", so he renamed it Dangerous Journey (Sacco, 1999).

[Digression: rpg-module by Michael C. Davis for LaTeX reproduces faithfully the layout of the modules of the 80s. I used it easily. I just dicovered TeXBrew which gives a imperssive outcomes for D&D 5th].


In TSR and WotC products

The stylistic devices « ___ & ___ » were not reused a lot by the others TSR and WotC products. Hypothesis : to distinguish D&D from its supplements or from other product lines (Star Frontiers, Gamma Worlds, etc.).

On the other hand, the stylistic devices « ___ & ___ » was used at least by 20 other publishers for games or perdiodicals. It could have been motivated by : homage, tribute, parody, pastiche, competition or collaboration. 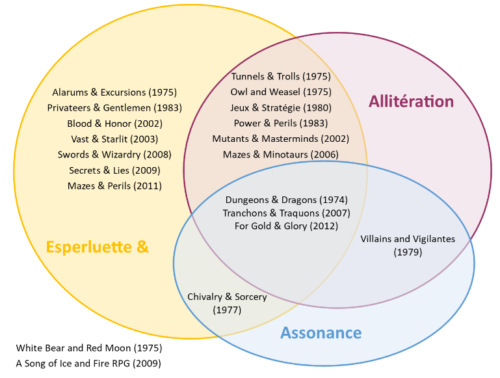 Venn diagram for the variations on the name « Dungeons & Dragons »

New items I discovered since the first publication of this post in French in May (with the help of Reddit):